(The Night of Lindt Bars)

Seattle Cosmic colluded and collided yet again last Saturday, this time at Metro Seattle Gamers in Ballard. We're testing the waters at MSG; should things prove congenial there, it may become Seattle Cosmic's new home.

Present last week were Dave Adams, Kathy Kizer, Kisa Gryphon, Paul Unwin, Peter Schultz, and me, Ron Hale-Evans. I arrived around 7pm to find Dave, Kathy, and Kisa playing RoboRally. Dave had been there since around noon, participating in MSG's (seasonal?) Formula De tournament. They had trophies and everything...

Apologies for the green tint in the next picture; Kathy and Dave look a bit mechanical, which I guess is appropriate, considering the game. Unfortunately, everyone looks a bit green around the gills this week; it's the fluorescents at MSG. We tried hard, but it looks worse in the browser -- the green background, maybe? We'll see if we can make you look more healthy next week. 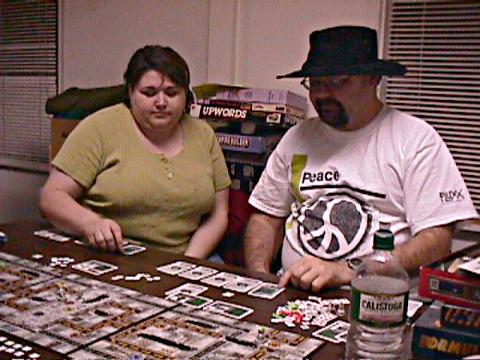 Dave won RoboRally, for which he was awarded a Lindt bar. Notice that Dave is actually a giant Fluxx card this week. In addition to being a Formula De and RoboRally fanatic, Dave has recently taken up Looney Labs games fanaticism in his spare time... 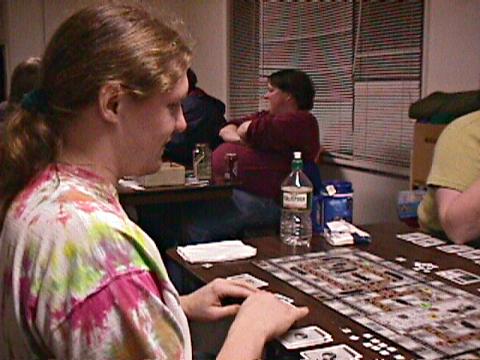 Peter and Paul arrived soon after Dave won RoboRally; Peter had a couple of mouthfuls of Dave's chocolate bar and started rebounding off the walls. We adjourned downstairs before we started making too much noise, and the consensus was that we should play Chrononauts, since I had brought it, some of us had not played it yet, and Dave (did I mention this?) is a Looney Labs fanatic. 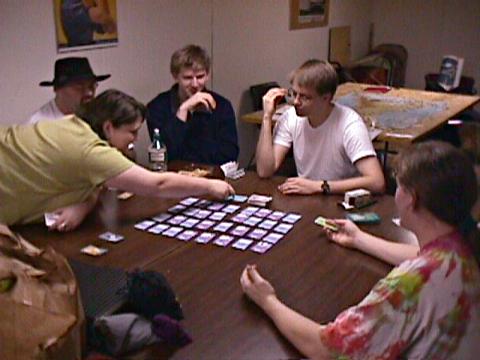 Chrononauts is a time-travel card game about rewriting history as you like it. One way to win is by collecting extra cards for repairing temporal paradoxes. The rules describe this as a reward from the Time Repair Agency. "Overtime!" said Dave.

If there are a fatal 13 unrepaired temporal paradoxes in the TimeLine, the Universe is destroyed and everyone loses. Kisa decided this would be his alternate victory condition, or as he called it, "a Cthulhu win" (as in Illuminati). He reined this in real fast when told that if he destroyed the Universe, he wouldn't get any chocolate.

Peter got the chocolate, anyway (see below). I was close. I found myself wishing I had received a Memo From My Future Self warning me to play a Memo To Your Future Self card on Peter (cancels any action). Peter got a Lindt bar. 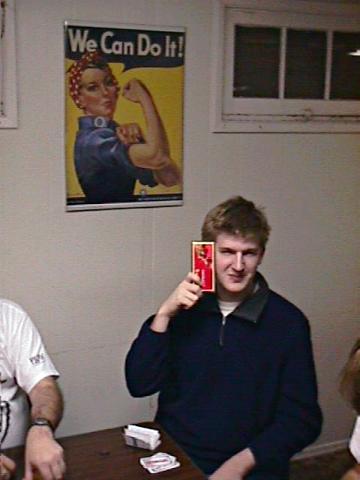 Peter can do it! He successfuly rewrites reality...

Next game: Chrononauts! Didn't we just play this in some alternate version of reality?

At one point someone played the 1999' (1999 Prime -- an alternate 1999) temporal paradox patch, in which Senator John Lennon (you heard me) averted the Columbine shootings by writing a gun control bill. "Imagine no assault rifles," sang Paul. He won too. Yep, another Lindt bar: white chocolate. Here he is, looking fluourescently undead. 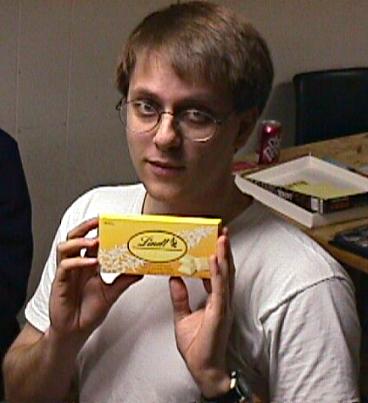 ...but Paul re-rewrites reality and wins the second game

Kisa had just bought a bunch of games from Placebo Press that day. Placebo Press are (IMHO) a sort of cut-rate Cheapass Games, if you can get your mind around that. White envelopes and everything. Some of the games looked pretty funny though, so we broke out Ebola Monkey Hunt. 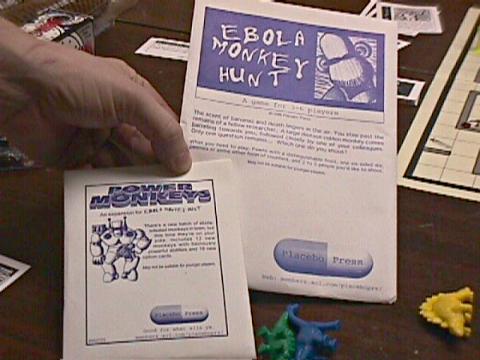 In this game, you move pawns around a board representing a floor of an office building into which some ebola monkeys have escaped. You're a member of the Center for Disease Control sent in to capture the monkeys -- a CDC member who really, really wants a research grant, and is willing to tranquilise fellow CDCers and steal their monkeys to get it. 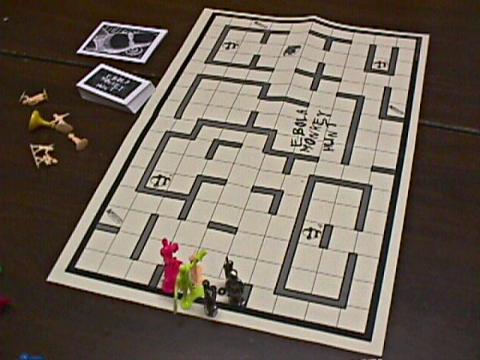 Our avatars prepare to venture in search of ebola monkeys... why?

The thing is, once you get a monkey, you're not always glad you did. They usually do something evil, like slow you down or steal everything you have, including your tranquiliser darts. Both these things happened to me. I was defenseless for half the game, and people stole monkeys from me freely. You can't put evil monkeys down, either. You just have to hope someone even more desperate for a research grant than you are steals them. 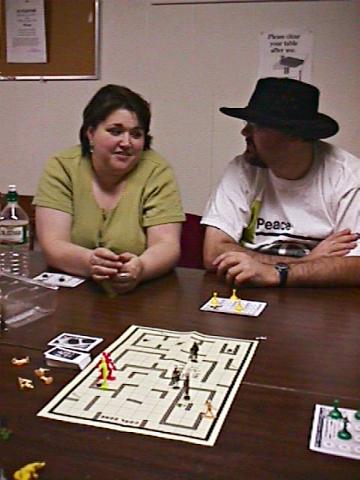 Kathy and Dave enjoying a moment's respite from diseased primates

Peter got a particularly vicious monkey named Donald McRonald who started eating him. Below is his reaction... 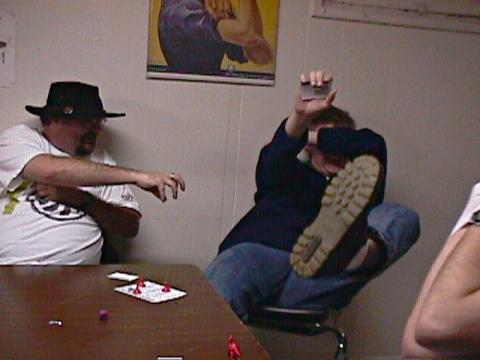 Opinions were mixed on Ebola Monkey Hunt. The game has more than a superficial resemblance to Cheapass's game Hong Kong Spree; Kisa said it was "like Spree, but funnier." It was funnier than I thought it would be, true, but I think Spree is more strategic. And Cheapass's rules are much clearer; as Paul said, "This game needs a hotline!"

But see for yourself; neither game costs more than $5.00, so you're not risking much.

Winner of Ebola Monkey Hunt was Kathy. She received -- guess what? -- a Lindt bar! 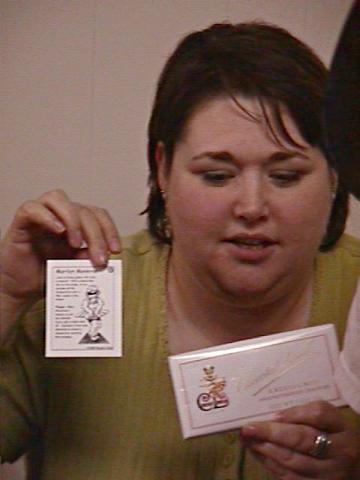 Kathy happily trades in her diseased monkey for chocolate

Before we left, we all got a couple of eyefuls of Kisa's nifty gaming box. It's meant to carry collectible card games. Kisa got it when he was demo-ing the Legend of the Five Rings CCG. It's a custom item; it was never actually produced, and universal opinion that night was that letting this item go unmanufactured was a damned shame.

As you can see, it has a tray for carrying dice and gaming stones (below left) and a larger compartment beneath suitable for carrying any number of card games, not just CCGs. Since Kisa had just joined the group recently, several of us suspected "Kisa" had killed the original owner, then taken his name -- and his box. (Turn me on, dead man. If you lay out the Chrononauts cards just right, they spell out "I buried Kisa. 29 IF.")

Oh, we lusted. I have looked; where can I get something like this? Email me if you know. 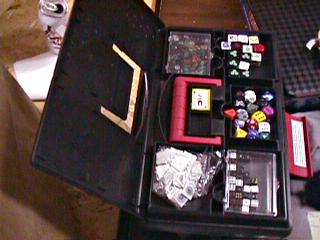 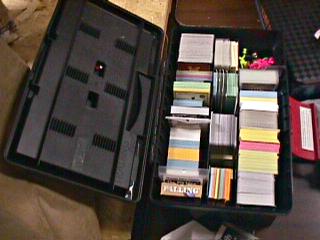 The object of our affections

And so, harbouring more murderous thoughts than usual, we parted, until next week -- which is a Cosmic Night, so we'll be playing Cosmic Encounter.

All photos on this page copyright © 2000 by Ron Hale-Evans except where otherwise noted. Thanks go to Marty Hale-Evans for jokes and editing.