The First Night at Dave and Kathy's

(The Night of Two Tims, and Many Happy Returns)

We split into two groups. Mark, Kisa, John, and I played Cosmic Encounter, since it was a Cosmic Night. Dave, Kathy, Marty, Greg, Crystal, and Tim Higgins decided to play Settlers of Catan, with the 5-6 player and "Cities and Knights" expansions. 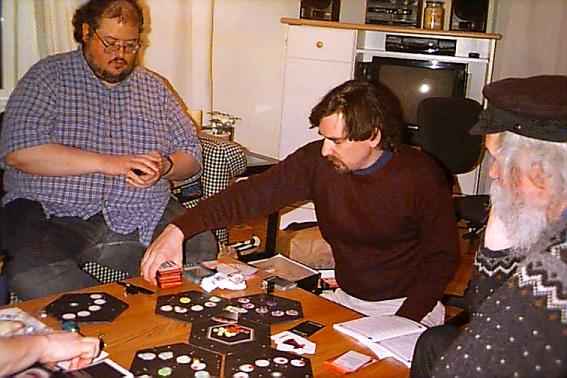 That's not an Attack card and a big pile of Reinforcements Mark is laying on Ron -- this is just setup.

Marty and I both tend to find vanilla Settlers somewhat bland, but Marty later assured me that "Cities and Knights" made a big difference in the complexity and interest of gameplay. 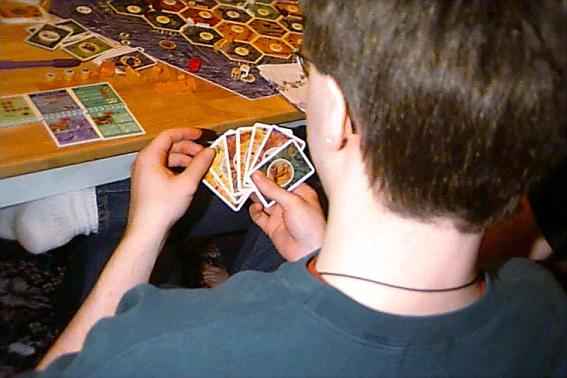 Camera-guy Dave, why are you peeking at Greg's Settlers cards?

About this time, Dave's friend Tim Leggett arrived. He watched the Settlers game for a few minutes, then decided to settle in and observe our Cosmic game... 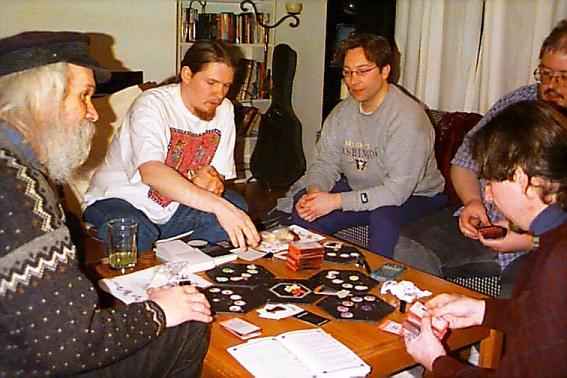 The Settlers game ground on. It's normally supposed to be a fast game, isn't it? 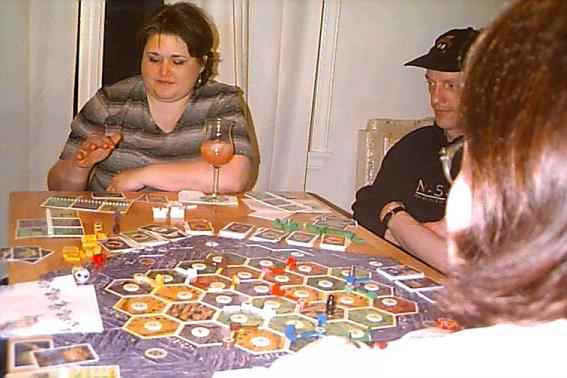 The Kathy of Catan

Despite what Kisa seems to be saying in the photo below, John pulled off a quick solo win in Cosmic as the Deuce-Mesmer. He was awarded a copy of Interstellar Pig, a juvenile science fiction novel by William Sleator. The connection? The eponymous board game of the novel bears more than a passing, indeed a suspicious, resemblance to Cosmic Encounter. Greg, Crystal, and Mark (who had been given the novel by someone else because it contained a pig) all agreed with me on this, Crystal and Greg vociferously. 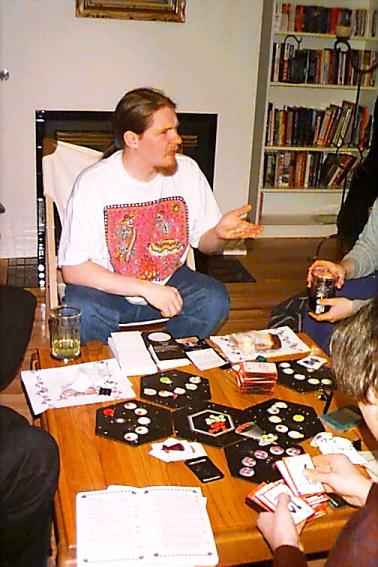 Kisa: "You should all accept that I am going to win."

Meanwhile the Settlers game was not going well for Dave, Kathy, and Tim... 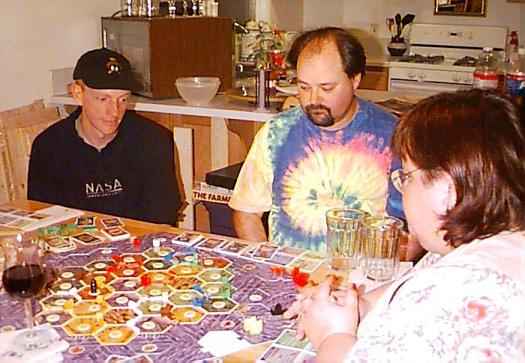 Since the first Cosmic game had gone quickly, we decided to play a second one, with Tim Leggett joining us this time.

This game was fierce. At one point, John played the Wild Disease Flare, which meant everyone had to discard a whole bunch of cards and one of our powers apiece. It was worse than the Plague Edict, even worse than the Internet Edict called "Black Plague". "I really feel for you guys," said John the Empath-Cannibal (the only one of us left with two powers). John then decided not to be empathic after all, and used the Wild Connoisseur Flare to dump Empath and randomly pick Busybody (which is a weak power -- he was better off with his old power, and I don't think he ever used his new one).

Not that John had been a very empathic Cannibal anyway. Cannibal is an Internet power that lets you gobble up other players' tokens with which you share a base. After we lost a base or two, we learned not to ally with John (at least in offense).

Around about this point (10:30 or so), I felt a bit ill, so I excused myself to the bathroom. While I was gone, Dave released his pet dove, which is a good mimic and provided a laughtrack for the evening by laughing maniacally every few minutes. When I got back, I was instantly the tallest thing in the room, so it swooped down on my head, and kept returning after being shooed. I won't say I took it as a sign of divine favour, but it did make me feel better. So thanks, Dave, for flipping me your bird! 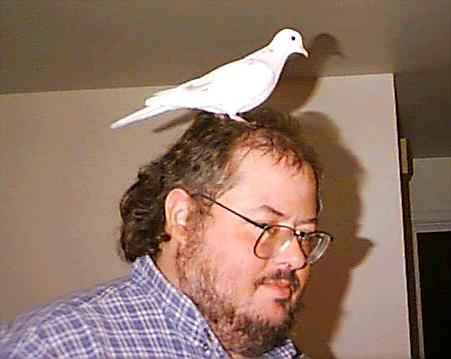 Yo ho ho! Ron prefers the dove of peace to the parrot of booty. (The dove likes Ron too.)

During my last few games of Cosmic, I had kept drawing lousy hands, so when one of the Flares I drew during setup was Philanthropist, a seemingly weak power that allows you to give away cards, I was delighted, because it meant I could draw a new hand periodically. Near the end of the game, I drew a War card, which wins against any Attack and loses to a Compromise. This was the sort of thing I had hoped for. I bitched and moaned, complaining I had crap in my new hand, so that John (my opponent) would not suss out my War card and play a Compromise. He gathered a bunch of defensive allies for the Last Battle, so I was pretty sure he was going to play a high Attack card if he could. I played the War card, John played an Attack, and I won solo.

Tim Leggett seemed really taken with Cosmic, and we hope he plays many more games with us. 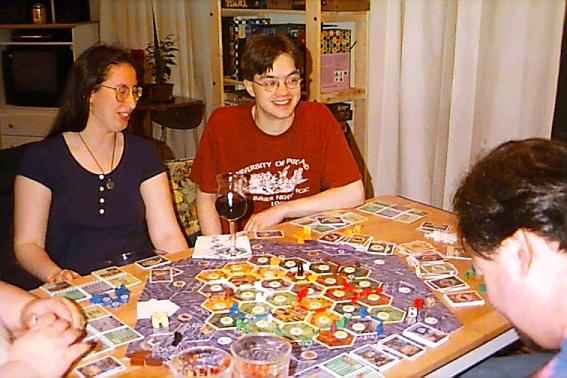 Crystal and Greg, expert Settlers players, look very, very smug, about 29 seconds before Marty beats the crap out of them.

Suddenly Marty shouted, "I am the Queen of Catan!" and there was wild applause from the Settlers table. Marty had won the game.

Game night broke up at around 12:10 AM. For once, someone gave me and Marty a prize -- Kathy gave us some nice, sturdy storage boxes she and Dave had used in their move (thanks, Kathy). She remarked, "You know, game night is a really good incentive to clean up." Yes, but how will we clean our house now that we're no longer hosting game night?

We still have time to find out, because our apartment is now the backup location, and we're hosting again on April 7th.

Remember, game nights are every Saturday at 7:00 PM at Dave and Kathy's house in West Seattle. Please bring a snack or drink to share (cookies, chips, soda, juice, etc.).