On TaxDay, Saturday, 15 April, we had another game night at Ron and Marty's. Normally people might be home with calculator and pencil, sweating over their returns, but this year the 15th fell on a weekend, so we all had a reprieve until Monday the 17th. Present were Ron, Marty, Mark Purtill, and Dave Adams. The games we played were Cosmic Encounter, Focus, and Can't Stop. Pictures of the evening, including some not appearing on this page, are available at http://www.ludism.org/scpix/20000415/.

First up was Cosmic, with all four people playing. We used the "draw 5 powers, pass one right, pass one left, discard 3" method. It was in this phase of the game that I made the Big Mistake of the evening. Drawing the Judge power, reading the card, and thinking "no sane person would want to play this," I passed it to Dave, rather than waiting to discard it. This proved the undoing of everyone else, as Dave decided to play Judge-Oracle and won in short order. Here is a picture of the happy Dave: 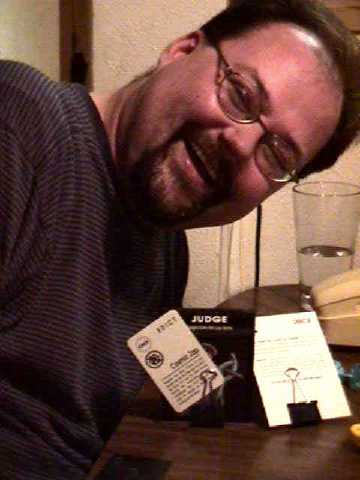 A word about Judge: Judge is listed under "Abused Powers" with Force and Witch in the More CE rulebook. The power card itself bears a large Surgeon General's warning in boldface, reading "Not recommended for use without prior understanding." Dave said he understood the power, so we let him play it, but I'm not sure he or anyone else in the game actually did. Dave kept trying to assign extra gains with the Judge, such as two bases, whereas the Judge card states "The gains you dictate are limited by the rules of deals," so you cannot assign a gain of more than one base. The rest of us were as much at fault, I think -- I'm pretty sure I don't recall anyone invoking the rule that when someone plays a Compromise card, the Judge's fiat has no effect, and I certainly don't remember anyone invoking the clause that when the normal flow of the challenge is interrupted, the Judge's power fails. Since one of Marty's powers was Busybody, we could have invoked this limitation quite a bit.

Anyway, all Dave had to do was say, "Loser gets a base on the winner's planet" whenever someone challenged him, and he couldn't lose. He merely had to engage in five challenges -- when he was the winner he got a base, and when he was the loser he got one too. The game lasted a little longer than one might think, since Dave got Cosmic Zapped a couple of times, but in the end the Judge was the winner, as expected. The incredible power the Judge has was highlighted by the fact that when Dave won, he had 3 (or maybe 2) tokens on home bases -- almost all the rest had been "funged" by yours truly, the Fungus-Worm, and were stacked up under my Fungus tokens. In the final challenge, Dave played a 4 Attack, and Marty decided she would commit a suicide run with a -8 Attack and a x2 Kicker for a card total of -16. Here is Marty's summation of her feelings. I think everyone but Dave felt the same way: 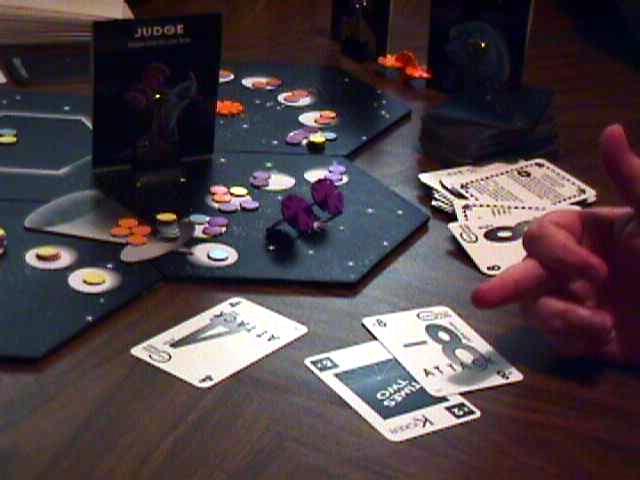 I recommend we do not play the three Abused Powers (Judge, Witch, or Force) in future. Either that, or when someone draws one of them, everyone else can make a ritual obeisance and immediately resign the game, thereby depriving anyone who insists playing an abused power of the fun of "winning". (Marty actually drew Witch during setup, blanched, stuck it back in the box, and drew again, proving once more how much more sense she has than I.)

Anyway, Dave's fabulous prize was a copy of a book of cooperative games with no winners and no losers (Playfair, I believe), because Winning Isn't Everything. Dave left after the Cosmic game, since he had to be up early, but the game had gone so quickly that Marty, Mark, and I had plenty of time for two more games, both Sid Sackson gems: Focus and Can't Stop.

You've all heard me blather about how wonderful Focus is; take a look at Marty and Mark playing it: 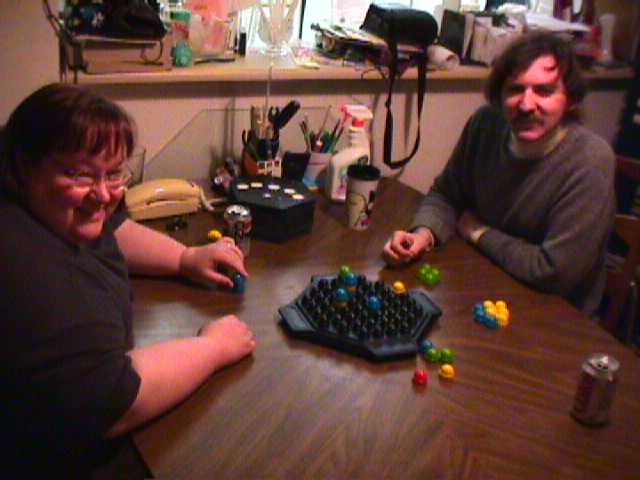 And here's a close-up of the board: 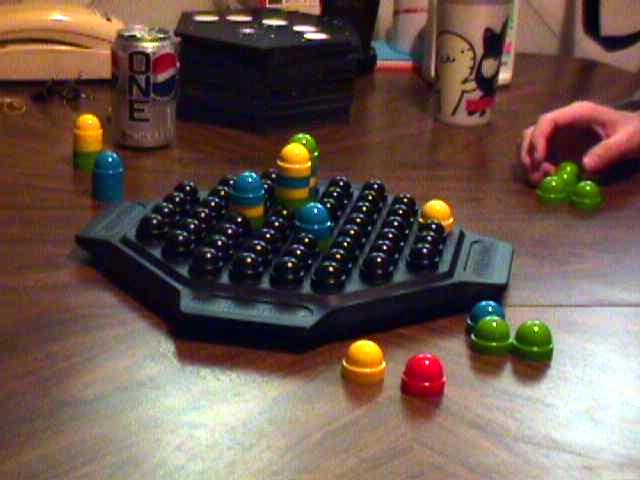 Those little round things that look like Scrubbing Bubbles are the pieces; you stack them, up to 5 high, and a stack moves exactly as far as it has pieces -- 3-piece stacks move 3 spaces, and so on. You can move partial stacks. The colour on top controls the stack. If a stack becomes higher than 5, you take pieces off the bottom; tokens of your colour become reinforcements to parachute in later, and other-coloured pieces become prisoners. That's about it for the rules. It plays brilliantly, and so did Mark, who won the game, despite his playing it against comparatively experienced opponents. In the end, the contest was between Mark and Marty; although I appreciate Focus for its beauty and elegance, I get beaten at least 2/3 of the time.

Next up was Can't Stop, a light Sacksonian diversion that "nicely clears the palate", as Marty says. It is a strategic game of chance; had it been invented a couple of hundred years ago, I could see it as a fixture in many casinos. (People have actually invented Blackjack-like "systems" for Can't Stop.) 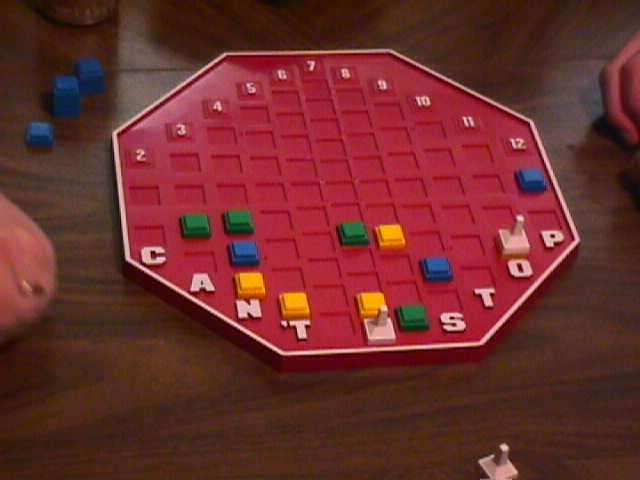 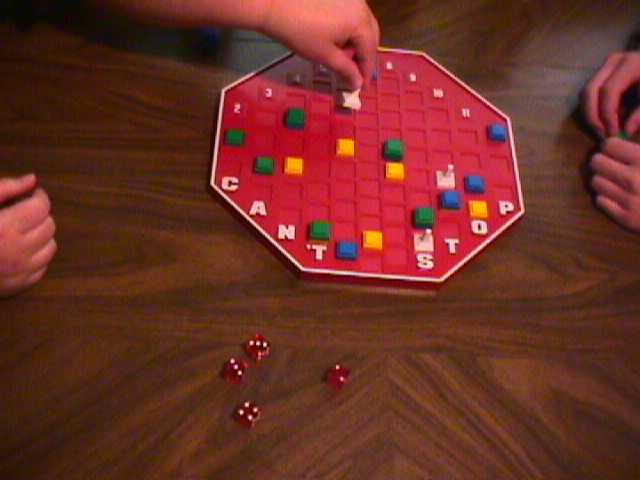 I won't go into detail on the rules here, but suffice it to say that there is a very strong incentive at certain points in the game to push your luck, to roll the dice just one more time -- and that's the name of the game. There was a point in the middle where we three "blew it" or crapped out after pushing our luck too far about 4 turns in a row. It's easy to get overconfident and misjudge the odds, but mathematician Mark prevailed again and won this game too.

Mark took home as the prize for his double victory not two years' supply of Turtle Wax, but two bags of Dragon Dice from TSR, with an expansion set in each bag (Swamp Monsters and Amazons). Marty and I had bought these to play together, but found the rules too complex; nevertheless, there are people who really like Dragon Dice, and I'm sure Mark will have no trouble, as he is the nearest thing Seattle-Cosmic has to a rules lawyer (and I mean that in a good way -- he reminds me of my friend Moses, also a mathematician, who could be counted on to explicate our way out of the hairiest paradoxes in Nomic).