by Ron and Marty Hale-Evans

According to Marty, Stephenson's Rocket is a "railroad-themed game" set in Victorian England. It's more of a railroad speculation game than the typical Empire-Builder-style conventional railroad game; the object of the game is to have the most money, but there are many more ways to accumulate it than building a railroad, including stocks, railroad mergers, speculating in commodities, speculating about where the railroads are going to go and then building stations, and speculating on ways the railroad can be used. One then accumulates power within the railroad to control where the railroad is built so that it will serve your interests and make your speculation pay off. 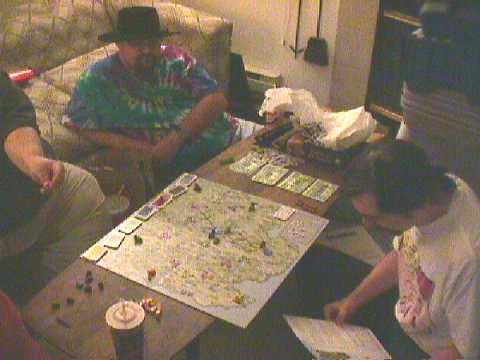 Meanwhile, Paul, Kam, Kathy, and Ron played Tikal, an archaeologically-themed game that won both the German Game of the Year Award (Spiel des Jahres) and the German Game Prize (Deutcher Spiele Preise) for 1999. We played only the basic version, but it was already clear why this game was so popular: budgeted action points. You get 10 action points per turn and must be careful not to squander them on pointless actions, squeezing every last drop of gamey goodness out of them. I had already read an interesting article on budgeted action points from The Games Journal that convinced me (Ron) I wanted to try Tikal instead of Stephenson's Rocket -- I recommend the article to you. 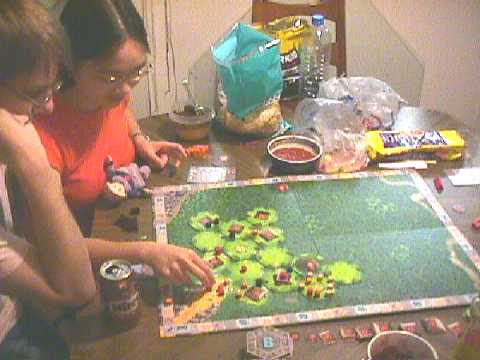 Paul and Kam are conspiring again, this time in Tikal

Players take turns placing hexes on the board, then spending their action points on actions like movement, digging up treasure, uncovering successive levels of overgrown ziggurats, and so on. Every so often, a player turns up a volcano hex, which indicates a scoring round. The volcano hex doesn't get placed until all players have had a chance to maximise their scores, so we let Kam's friend Padme (from Star Wars: The Phantom Menace) hang onto it while we maneuvered. 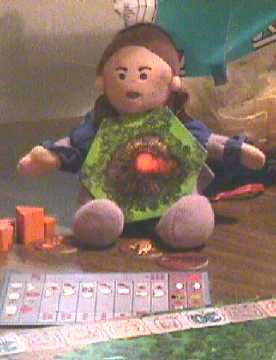 Padme hangs onto a volcano hex for us

Mark, Dave, Marty, and Naomi, none of whom had played Stephenson's Rocket before, found it an intricate yet flexible game, with a great many of both rules and possible moves, an aspect some players found frustrating. 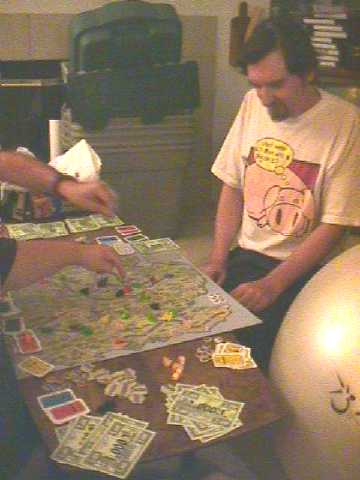 Dave and Naomi compare strategies to thwart Mark, as Mark looks on in amusement. (Notice FitBall in lower right, doubling as extra seating.)

In the midgame of Stephenson's Rocket, players amass power within a railroad company by gaining shares by extending the line. However, other players who have stock in the same line can bid to veto your chosen move. If you want to maintain control and bring the line where you need it to make money, you may have to pay your shares to do it, thereby reducing your power within the company. This is one way players can balance control and gain an advantage. 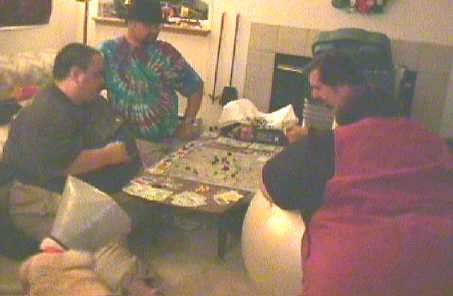 Everyone playing Stephenson's Rocket, plus our dog Buckethead, er, Gwenyth

Back to Tikal: I didn't feel I had a clear understanding of the rules, myself. I didn't know, for example, that you could put a guard on a ziggurat anytime you wanted to, or even (early on) that you could do it at all. 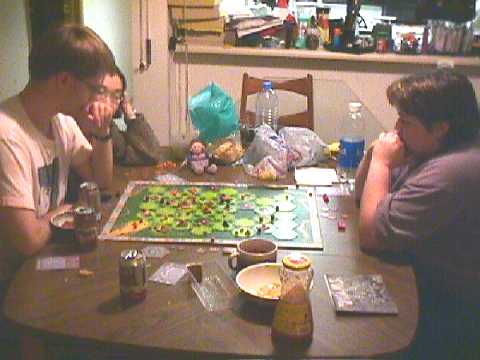 Tikal, late in the game. Ron is playing, but does not have a head this week.

When it became evident to all that Kathy (who had already played) had a massive lead, I cursed bitterly under my breath and promised myself I would revert to my old practice of scrutinising the rules booklet on other players' turns -- especially the "Strategy" section. Aheh heh. 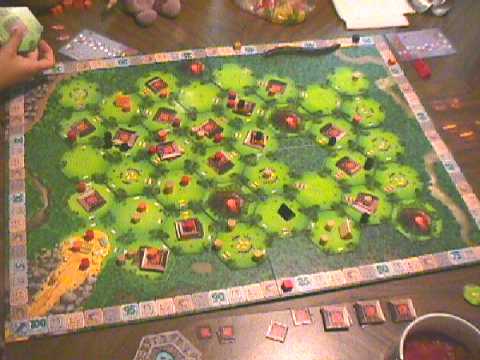 Close-up of Tikal board, late in the game

Mark, Dave, and Naomi spent most of the Stephenson's Rocket game grappling over the largest system of railway lines. Meanwhile, Marty spent her time quietly building a smaller regional system in the south end of the country. Marty's system was smaller, but her control of it was less contested. This strategy was almost enough for her to win the game, taking her past both Dave and Naomi at the end, but not enough to finally beat Mark. 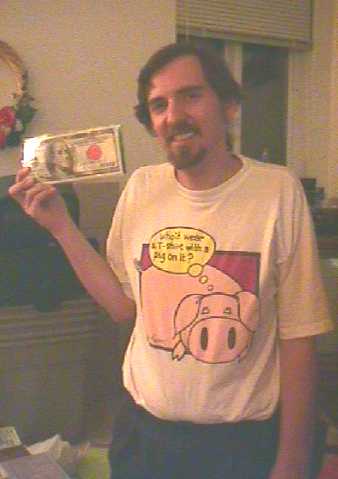 Capitalist Pig Mark shows off his "big money" prize for Stephenson's Rocket, unfortunately denominated in dollars, not pounds. (Shirt reads, "Who'd wear a T-shirt with a pig on it?" Someone in Texas thought Mark would.) 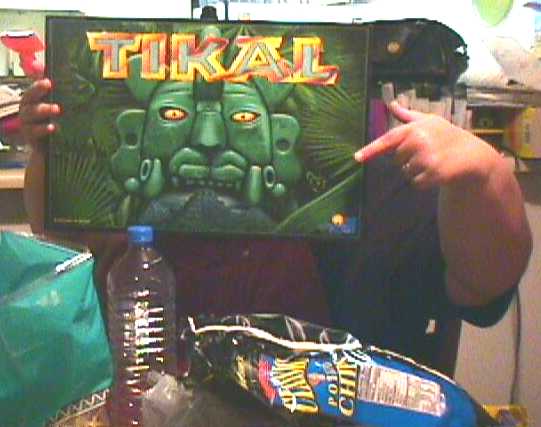 Marty does have a head this week; unfortunately, it is not her own.

Final scores for Tikal: Ron, 71 points; Kam, 95 points; Paul, 96 points, and winner Kathy with 109 points. In keeping with the theme of themed prizes, we gave Kathy a polychromatic lizard such as she might have found on one of her expeditions into the jungle... 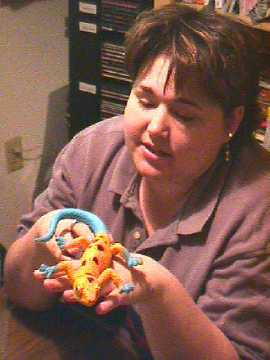 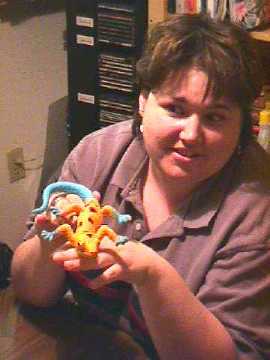 Just before leaving, Dave discovered a good use for the lizard. What's that? Yes, he does look like an Ayahuasca hallucination, how polite of you to notice. 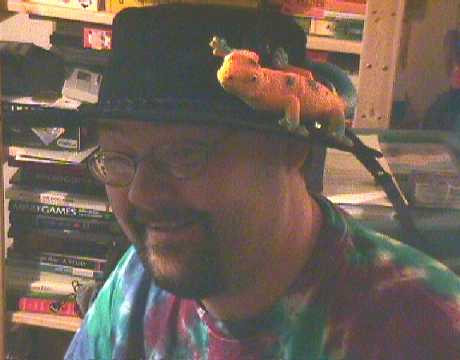 South of the Border Dave wants to know if you'd like to score some discount psychoactives.

Thanks to Dave and Mark this week for bringing Tikal and Stephenson's Rocket, respectively. Next game night is a Cosmic Night. The following Cosmic Night (9 September, if we keep to the schedule) will be Silly Cosmic Night. We intend to play a few silly Cosmic Encounter games, for example, using forbidden "omnipotent" power combinations, "weak" powers from the Internet like the Micron (each token is worth 0.25), Full Moons, Cheese Moons, and some surprises. Hope to see you there.

Remember, game nights at Ron and Marty's are every Saturday at 8:00 PM. Come play for fun and FABULOUS PRIZES! Please bring a snack or drink (cookies, chips, soda, juice, etc.).