by Ron and Marty Hale-Evans

Marty, Ron, and Karl arrived late at around 7:30 to find preparations for a RoboRally game already in progress.

Before people settled into their games, Kisa discussed the possibility of an adjunct weekly Seattle Cosmic meeting where people would play role-playing games. He announced that RPG Night would be every Wednesday at 6:30 at Dave's house (where we meet regularly). I am writing this on the Friday following their first meeting, and though I did not attend, I will say that those who did played Puppetland by John Tynes, which is a miniature RPG set in something like Mr. Rogers's Land of Make-Believe, gone bad. Apparently, all had fun, and more Puppetland sessions will occur in weeks to come.

I also distributed some prizes I owed people from last week. Dave got a chocolate bar for winning the Farming Game, Peter and Kathy each got one for their wins in Cosmic Encounter, and John got a little eensy-weensy Hershey's Miniature for his partaking in a dishonourable three-way win in a four-player game of Cosmic against total newbie Karl. (For shame!) Then he reminded me he had also won Through the Desert, so I gave him a big bar too. 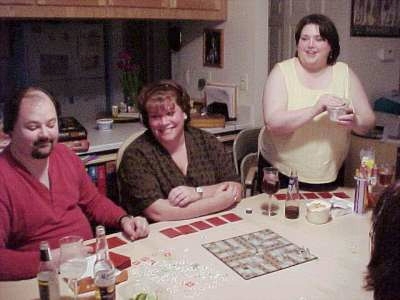 (Marty reports from Table 1, AKA the Rowdy Table.) Things started normally enough on the small RoboRally floor -- only one board and one flag created a small game that essentially consisted of a race to touch the far base and back again. After a few plays and a few false moves (one of which shunted Susie off the side of the board nearly immediately), Dave and Kathy took the lead, with Marty and Peter not far behind. 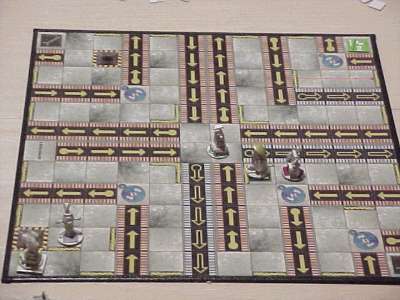 'Bots on the loose

Meanwhile, despite an accidental trip off the edge of the board, Dave's robot sped ahead and took the lead on the race back to home base. Marty's robot gained a lot of ground toward the end, but not quite enough to beat Dave's time or force his robot into an obstacle. So, at the finish, Dave won, with Marty ending close on his heels. Dave was awarded, as usual, a chocolate bar.

Ron here: At one point, a "Drinking RoboRally" variant was suggested: "When you get shot, you take a shot!" (There was more to it than that; perhaps we will present it along with Marty's "moving flags" variant on the Seattle Cosmic site.) 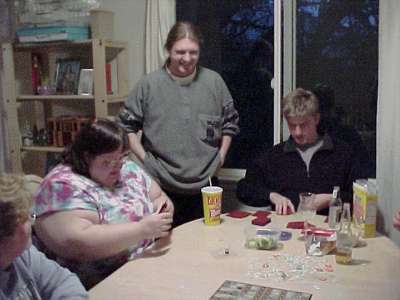 Kisa discusses the details for the new RPG offshoot

Back at the Zendo game, we decided to disregard the rule that states only the four regular Icehouse colours (red, green, blue, yellow) are to be used, and we used the colours from the Black Ice expansion too (black and clear).

Zendo is a weird game, and I'm not going to explain it in detail here; the rules are available online. Suffice it to say that the game's theme is Zen Buddhist practice. One player is the Master and the others are Students. The Master creates two riddles (or "koans") with Icehouse pieces. One of the Master's koans follows a particular rule (or "has the Buddha Nature"), while the other does not. The Students try to create structures that follow the same rule. When a Student is convinced s/he has guessed the Master's rule, s/he can state it aloud, paying for the privilege with "guessing stones" s/he acquired by creating koans with the Buddha Nature. The Student who states the rule correctly wins the game (or, as we played it, wins that round).

Mark was the first Master. His rule was that to have the Buddha Nature, a koan must have at least one upright pyramid. Karl stated the rule correctly and got to be the next Master. (Note: We gave yellow stones for correct koans, and blue stones for winning a round. As usual, a white stone meant a koan had the Buddha Nature and a black one meant it didn't. Actually, the white stones glowed in the dark, which I suppose is appropriate, considering the luminous numinousness of the Buddha Nature in Zen.)

Master Karl's rule was that a koan has the Buddha Nature if it has one green pyramid pointing at the base of a large (3-point) pyramid. Kisa stated the rule correctly and got to be the next Master.

It was now around 8:15. Master Kisa's rule was that a koan with the Buddha Nature has two or more pieces not parallel to one another. John won, and became the next Master. Here we see John setting up his "correct" and "incorrect" exemplar koans: 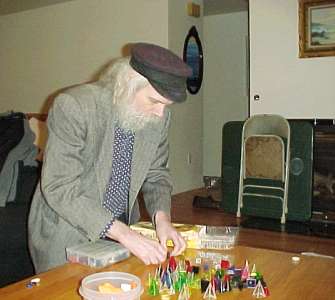 Guessing John's rule took a long time. Zendo, like New Eleusis, which it resembles strongly, can be seen as a model of scientific inquiry. My first guess at John's rule, then, was like the geocentric model of the solar system, full of epicycles upon epicycles, with all kinds of unnecessary clauses and special cases having to do with colour and size symmetry.

Guessing John's rule took so long that we had to keep breaking down earlier koans to make new ones, even with the Black Ice pieces. Maybe we should play with two Icehouse sets next time... 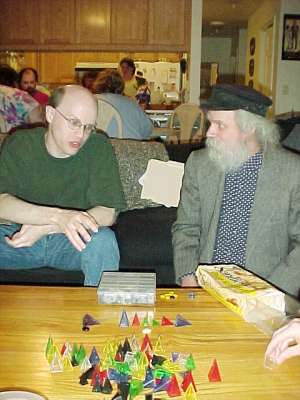 John's rule was simple, but his deception in setting up his exemplar koans was elaborate. Below you can see some koans without the Buddha Nature according to John's rule (left), and some with it (right). Can you guess John's rule? (Answer below.) 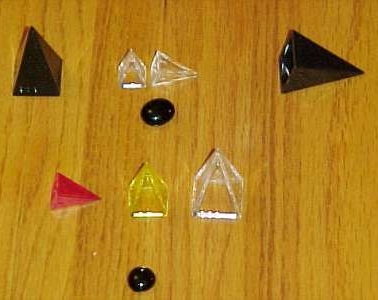 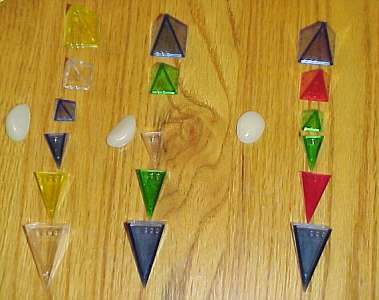 Around 9:30, Mark stated John's rule correctly. It was simply that a koan must have at least five pyramids to have the Buddha Nature. In Zendo as in science, sometimes apparently complex phenomena conceal the fact that they are governed by a simple law.

Mark had to leave, so the master's robe and bowl passed to me. Here are my "good exemplar" (left) and "bad exemplar" (right). Can you guess my rule?

My rule was simply "A koan must contain red, blue, and green." Karl somewhat strategically broke down my "good exemplar" to make his own koan (presumably taking a good look at it first), and John cried, "Mommy!" (Apparently, you can break down the Master's koans according to the rules, but no one had thought to!)

John didn't need his Mommy after all; he guessed my rule on his first turn.

Back at Table 1, the RoboRally players didn't seem to be able to finish at a point corresponding to a break in the Zendo play (for players to transfer), so we cast around for something else to play. Other idle speculation also took place, such as considering how to mix the perfect "Brain Hemorrhage" drink and wondering why 3M had decided to manufacture games at all. (Answer: to create a wider tape market with all those broken box corners!)

Trivial Pursuit came up for consideration, Marty casually mentioned that nobody would play TP with her because of the sad kicking of asses that invariably ensued, and the gauntlet was snatched up. 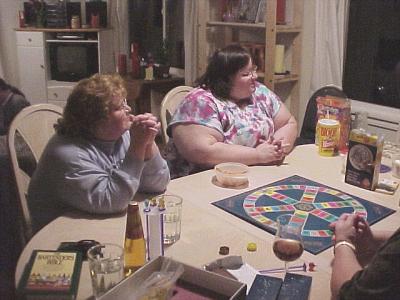 TP it is, but which card set?

We selected the '80s card set; Peter claimed that he was "not interested" in playing with the '80s set (read: "chicken"), and crossed over to the Zendo table.

Several players gained their first wedges, and then Marty had one good run that scored her three more, for a total of four. After a few more rounds, Marty gained the final two wedges and advanced to the center. Shrewdly, the other players elected to fire a sports question, and Marty was humiliated. While she worked her way back to the center twice more, other players advanced until Dave and Susie both had five wedges each as well. On each trip to the center, Marty was shot down with another sports question.

Finally taking pity when Marty eventually managed to reach the center again, the players chose a "Wild Card" question: What mature city's populace leads the US in prune juice consumption? With a sigh of relief (you'll pardon the expression), Marty answered correctly, "Miami!" and emerged victorious.

At the Zendo table, the other players welcomed Peter from fleeing the Trivial Pursuit game and elected him the new Master. Master Peter's rule was very hard to guess! Look at the koans littering the table in the next picture: 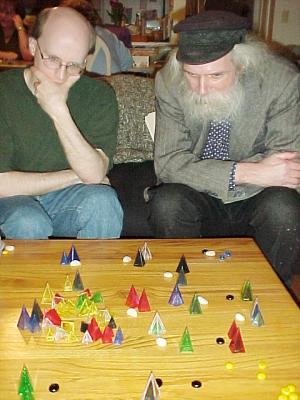 Peter got confused at one point and retracted a white stone from a koan he had previously said did have the Buddha Nature. This triggered a nervous hubbub among the Students, and I complained, "I don't think this Master has has received the Transmission Outside the Scriptures." John asked whether he could buy a koan... 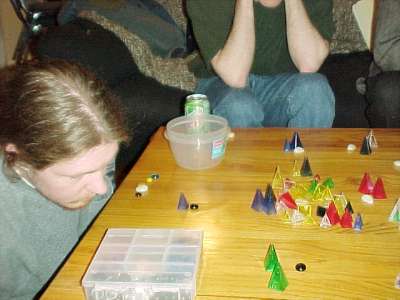 Kisa tries for a "koan's-eye" view of the table

Peter's rule was that a koan with Buddha Nature must contain two pyramids, 45 degrees in orientation from each other. I was close, but Peter made a secret judgment that my pieces weren't at exactly 45 degrees to each other, and I neglected to ask him whether they were, as was my privilege. Kisa was the one who stated it correctly.

Final score in Zendo: everyone won one round, except for me, who won zero, and John and Kisa, who won two rounds each and therefore each received a luscious choccy.

Next up for Table 2, AKA the Quiet Table: Before I Kill You, Mr. Bond, by Cheapass Games. I complained that this was not a strategic game: it's mechanical, because the best strategy is obvious at every point. Kisa replied that while he did not have the "Better Bond" now available from Cheapass, he had some variant rules that made it more strategic, so we played.

I took an early lead, getting up to 16 out of 30 points in a turn or two, refusing to taunt the secret agents I captured (if you taunt 'em, they can escape and blow up your lair), declaring, "I'm an evil genius, not an evil moron!" 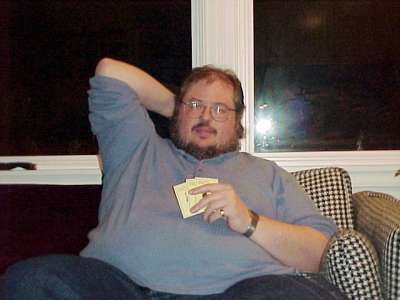 Like all evil geniuses in Bond movies, I laughed too soon. I was quickly leader-bashed for my hubris, while Karl quietly built up his lair, and even dared to taunt a spy or two, doubling their value. Soon there was nothing the rest of us could do, and Karl made it to 30 points, receiving a chocobar for his genius. 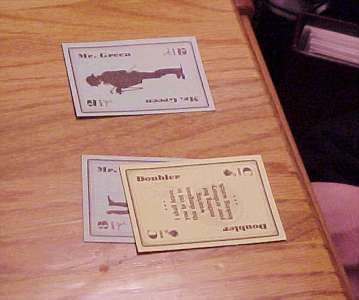 "Before I Kill You, Mr. Bond" cards

Peter and John departed around 11:40, leaving me, Karl and Kisa to play Kisa's game Master Labyrinth (from Ravensburger) at Table 2, while Trivial Pursuit raged on at Table 1. In Master Labyrinth, you slide some of the tiles of the labyrinth around on your turn, then try to capture "secret ingredient" tokens for your notional potion. Tokens run from 1 to 25, with a few missing. You are given a list of three that you are looking for in particular; if you capture these, you score an extra 20 points per; otherwise, you score just the number on the token. Great mechanism, fun game! 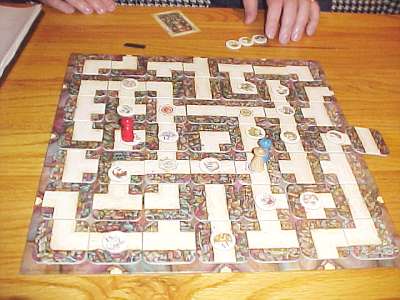 The board for Ravenbsurger's Master Labyrinth

We wrapped up at 1:00 AM sharp, when Marty won Trivial Pursuit. It turns out if we had scored the game before we left, I would have won, because I got one of the ingredients on my list, scoring around 25 points, while Karl scored nothing and Kisa scored around 10.

Remember, game nights are every Saturday at 7:00 PM, at Dave and Kathy's house in West Seattle. Please bring a snack or drink to share (cookies, chips, soda, juice, etc.).