Who Let the Tim Win?

It was a Cosmic Night, so first up on Table 1 was Cosmic Encounter. Mark, Alex, and I started setup. We took some time to explain the rules to Alex, who hadn't played since the early 1990s, but by 7:45 Chad still hadn't showed. Everyone else was at Table 2 playing Settlers of Catan, and they were well into it, so we decided that if Chad didn't show in the next few minutes, he was going to be playing Freecell. Solitaire, that is. That's a joke, son. Fortunately, Chad showed up at 7:48, and we picked powers.

We did our usual "draw four flares, pass one right, one left, toss one, and keep two of the remaining three" power-pick. Chad, who's fairly new to our CE set, passed me Shark, which is really only used in a 7 or 8 player game. We agreed I should toss it and draw another one. I drew Nomad, an Internet power which required extra Star Discs I had left at home. We agreed I should toss that too, and I drew Boomerang. This was a standard power, so I kept it. Meanwhile, I had passed the Internet power Empire to Mark, who had made a disparaging remark about it when we were explaining the game to Alex. It turned out Mark only disliked it when other people had Empire, so he kept it for himself. Thus, the opening lineup looked like this: 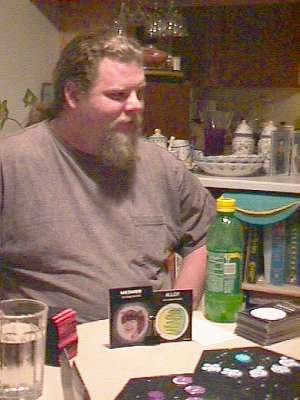 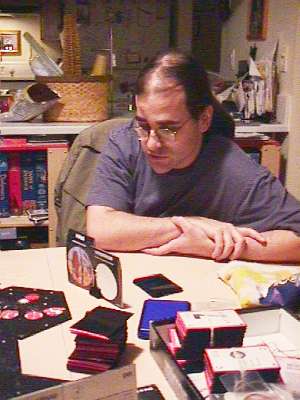 Chad was the Virus, which made us all groan. In one clever move, however, Mark played the Internet Edict "Conscientious Objector" on Chad, which meant he had zero tokens on his side (they had all become noncoms). Zero tokens times any value of Attack card is still zero, so Chad lost that challenge.

As Empire, Mark got two systems and two colours of token. Mark chose two shades of purple. (See the picture below. The nearly-invisible black star disc in the lower purple system is actually ultra-lavender, which is to lavender as ultraviolet is to violet.) 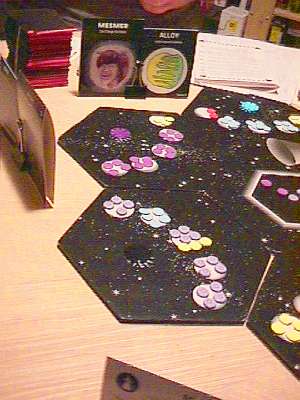 Of course, Mark also got twice as many turns as anyone -- except me, since as Boomerang, I immediately made a pre-emptive challenge against anyone who challenged me. And as Spiff, I could crash-land on a planet whenever I lost by 10 or more. Boomerang-Spiff was an, er, spiffy combination. Unfortunately, as Mesmer, Alex could use any Edict as any other, and by the time I was up to four bases, he made it clear that he had a handful of Edicts and was willing to Cosmic Zap me anytime I was going to crash-land with my Spiff power.

Mark drew my colour in the Destiny deck, and I made a pre-emptive attack on his planet. All I had was two lousy Compromise cards, and I knew that if I didn't get some better cards soon, I would lose one of my remaining three home bases to Mark and have to lose one of my powers. I decided to place four tokens in the Cone, on the theory that I would lose those four tokens to the Warp and get four cards from Mark's hand as consolation. (Did I mention he got twice as many cards, too?) Unfortunately for Mark, he guessed that I had a juicy attack card and was sincerely trying for my fifth base. He invited allies, presumably as decoys, because he played a War card... which lost to my lousy Compromise.

Alex leapt in and asked whether he could reverse the challenge with his secret Negator power (his Alloy power let him draw sequential secret powers from those currently unused). "I don't think so," said Mark. "Ahem, mumble, I don't think so either," I muttered. And so my solo win went unchallenged.

Thinking about it later, I said, "If you had managed to Negate my card, I only could have played my other Compromise anyway." Alex said, "Oh no, I was going to Negate Mark's War card." Makes sense, but I double-checked the Negator card when I got home, and it reads quite clearly, "Once, before cards are revealed in any challenge, you may make any other player change a specific game action he has just taken." (Emphasis mine.) So Mark and I were right; there was no way that Alex could have Negated our challenge once it had taken place. The fact remains, though, that if Mark hadn't played that War card, chances are good I would have lost a base and a power in the next challenge, or if not, Alex would have Cosmic Zapped me endlessly, and things might have gone quite differently. I guess those are the fortunes of war... or of War.

Incidentally, that was another weird feature of the evening. Even though we only went through half the deck, we drew almost every War card in it. We thought we had gotten all of them when we had drawn five, but then we drew more. There were eight in the deck, as per the rules at the Warp, which specify eight War cards for a Mayfair CE + More CE set (and our deck is even bigger).

Settlers of Catan (Knights and Cities)

Meanwhile, at Table 2, Marty, Dave, Kathy, and Tim had settled in for a long, long, long game of Settlers, with the Cities and Knights expansion. 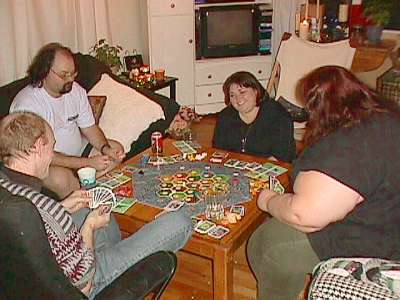 I wasn't playing at this table, but over at the Cosmic table we could hear occasional shouts of jubilation and other utterances, some of which I have compiled here for you:

Yes, Tim won. Marty awarded him a baboon statuette from Archie McPhee. "It's the only thing in the prize bag he hasn't won!" she said. Indeed, Tim wins a lot. I am telling you this because I have been lax in writing newsletters lately, and Tim complains that the sessions wherein he wins stuff never get written up. Well, I'll say it again: Tim wins a lot.

Marty neglected to snap a photo of Tim with his simian prize, but she has made good by seamlessly Gimping together an old photo of Tim with a shot from a previous newsletter in which Meredith Wilson won the identical baboon. Don't worry; you can hardly tell the difference... 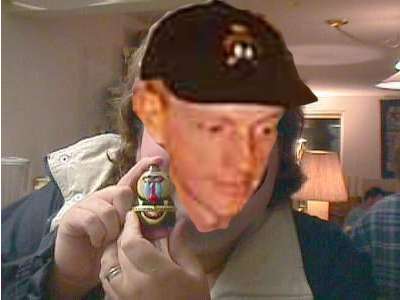 There are some who call me... TIM?

Thanks largely to a couple of Hurricanes, Mark and Chad managed to Sweep us off the table, 16 to 7. Mark was awarded a foam rubber rock, and Chad got a clear plastic Insect Inspector (see below). 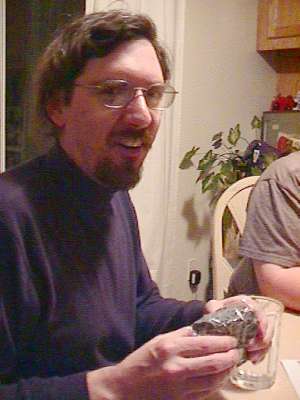 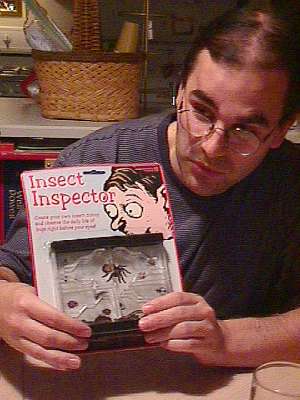 Next up, Table 1 played Morisi, a new game Chad had brought. Morisi is a multiplayer sequel to the two-player game Isi. The name stands for "More Isi" -- geddit? It certainly doesn't stand for "More Easy", cos I did miserably. 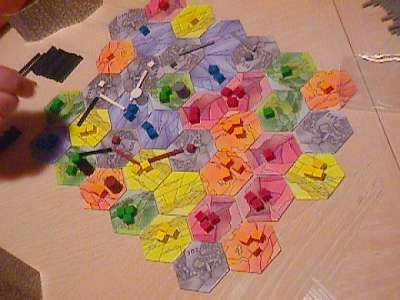 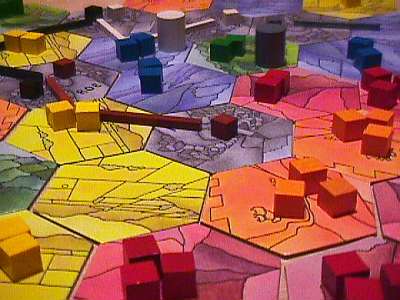 Morisi is a game of building trade routes (the long thin sticks in the photos above) between cities (the grey hexagons with names on them like "Roe") and expanding the cities by adding buildings (the cubes on the grey hexagons; there are also buildings with peaked roofs like houses). Scoring is complex, but suffice it to say if you have a relatively large number of big buildings, you're likely to win. Alex did, and he spanked us badly. Here are the scores:

Alex won a plastic clacking toy which I had hoped would enhance his geekosphere at work, but which he said his 3-year-old daughter would enjoy. Maybe Alex doesn't have a geekosphere. At least he has work. (Sniffle.)

Table 2 had finally finished their Settlers game (who let the Tim win?), and had started a few hands of Hearts to kill time. Tim shot the Moon on the first hand (darn that Tim!), but no winner was declared as this wasn't a serious game.

Chad and I considered a game of Zertz, but we just waited a few minutes and the Hearts hand was done. Marty and I left around 11:20 PM, as we had gotten up at 6:30 AM to be among the first to see the Harry Potter movie in Seattle.

Dave, Kathy, Tim and Chad stayed and played Acquire. As Marty and I were leaving, I could hear Dave saying he wanted to play by partnership rules. WARNING: Dave will try to talk you into an Acquire variant that he played every weekend for years at the University of New Mexico. It involves partnership play, drawing extra tiles, and a handful of other changes to the game that Dave says make it "better". You have been warned.

Needless to say, Dave and Kathy (partners) prevailed against Tim and Chad (partners), $69,000 to $57,000. Chad hadn't played before, so that didn't help their team either. Good thing this wasn't real money.

And so, another Seattle Cosmic Game Night ended at Ghod-Knows-What AM in the morning. Next week in Mill Creek! Be there or be square, cos it'll be totally tubular.

The Center for Ludic Synergy and Seattle Cosmic Game Night are now associates of Funagain Games. This means that 5% of your purchase there goes toward supporting us if you buy games there via the following links or the Funagain logo at the bottom of the page.