Oh yes, sports fans, it's an account of the Game Night That Almost Wasn't (Because We Had Put It Off So Damn Many Times None of Us Really Believed We'd Do It) -- Cheesy Cosmic Night! Formerly known as Silly Cosmic (by Ron), then as Krazy Kosmic (by Paul), the event finally came to be known as Cheesy Cosmic (thanks to Mark). I don't remember who suggested that bringing snacks with cheese in them was mandatory, but we had a pile of cheesy snacks in the kitchen about two feet high: slices of Cheddar, cheese crackers, cheese bread, a cheese ball, several kinds of Cheez Doodles and their styrofoamy ilk, and a cherry cheesecake (that was mine -- I've got a devilish sweet tooth).

Things got off to a late start because Marty and I were busy getting some Cosmic powers from the Internet printed up at Kinko's, and it took about thrice as long as they told us. Then I had to type up some materials for our Very Special Episode of Game Night.

The evening was divided into two segments: Omnipotent and Impotent. We randomly split into two teams before the Omnipotent Segment of the Evening. Why was it called that? Well, each team received the following handout:

What's special about these power combinations? According to the Mayfair CE rules, they're impossibly strong, and therefore either out and out illegal (Mesmer-Vulch, collects all used Edict cards and gets to play them as any other Edict card) or unadvisable (Judge-Filth; it's frequently unadvisable to let Judge into the game, as we have discovered before).

Powers were randomly allotted as follows (Marty was observer/photographer):


I have the handout sheets we used next to me. It says here beside Dave's Judge-Filth powers, in an unknown hand, "(supposedly random!)". You may remember it was Dave who played Judge on TaxDay, and he drew the power during Cosmic Hearts as well (it was just as unbalanced in that game). Oh, well -- I ended up with the Omnipotent Power I would have picked (Mesmer-Vulch), and I also got the Slug (a Bad Power) later. Things just fell into place for Cheesy Cosmic Night.

Below is depicted the The Even Team's board during the Omnipotent Game. We're not sure what the fleshy thing that looks like the elderly bastard offspring of Queen Victoria and Winston Churchill in the upper right-hand corner is, but we think it might be a bad shot of Paul with his head in his hands. Or maybe it's a Boggart. 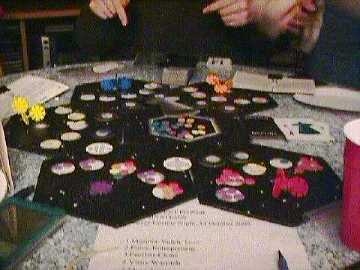 The Even Team's board during the Omnipotent Game

Time has clouded my memory of that game, thankfully, but I should tell you here that we played all games that night with a 50/50 mixture of Full Moons and Cheese Moons (please don't cry), and Lion got the Cheese Moon that made him sing a little song about his power. He burst into a mighty oratorio about the Oracle-Sorcerer that sounded extremely well-written for a spur-of-the-moment ditty, until we realised he was reading the backs of his power cards. We threatened him with severe game penalties unless he sang a proper song about the Oracle-Sorceror. With rhymes. He did.

Having avoided the penalty on the Cheese Moon, Lion went on to win the Even Omnipotent Game, for which he was awarded a sack of Magic Rocks. 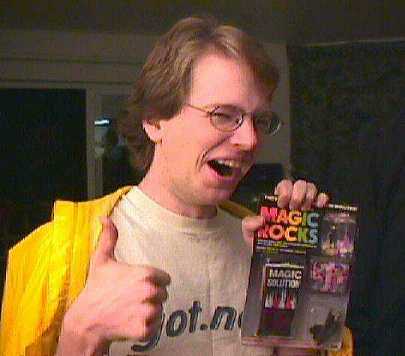 Meanwhile, in the Odd Omnipotent Game, Mark was busy trashing everyone, even the Judge-Filth. He was the Machine-Filch, you see; as Machine he could keep challenging opponents as long as he had Challenge cards left, and as Filch, he could take any Challenge card they dropped. In our game, Mesmer-Vulch (Ron) trumped Machine-Filch (Peter), because when Peter tried to take an infinite, game-winning turn, I just played one of the Edicts in my hand as Cosmic Zap and stopped him in his tracks. In the Odd Omnipotent Game, however, there was no Mesmer-Vulch to stop Mark, so he won in one turn. 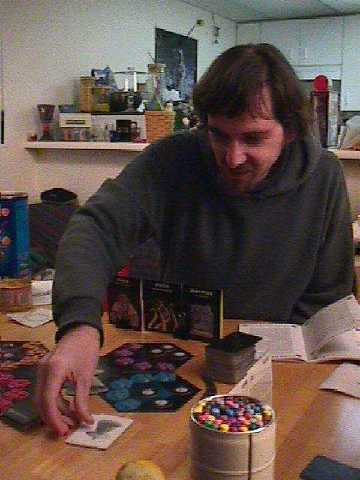 A confident play by Mark, and why not? (Odd Omnipotent Game)

As Mark remembers it: 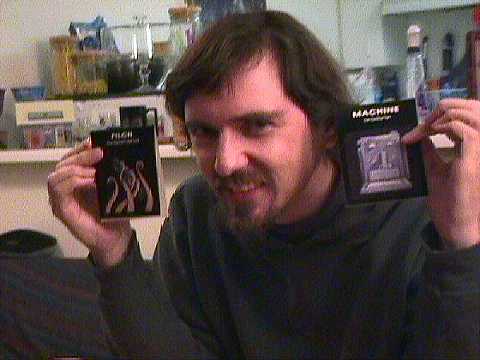 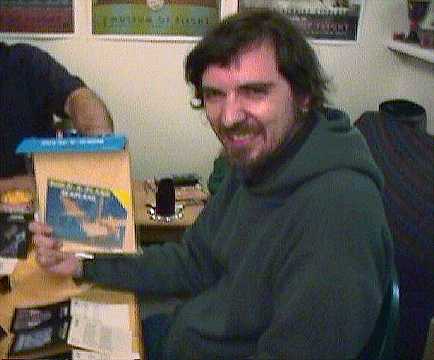 Next up was the Er, Impotent Segment of the Evening. In this game, team members took two Bad Powers apiece. Bad Powers are an Internet innovation. They are powers so bad that they are actually disabilities; playing a Bad Power is like giving your opponent a power to use against you. One Bad Power is bad enough; two is... well, refreshing, after the Omnipotent Segment of the Evening -- wouldn't you say, guys?

You can find many Bad Powers at one of the main Cosmic Encounter websites, Jack Reda's The Warp. I found a bunch more on the Usenet newsgroup rec.games.board.ce. I took everything I found and reformatted it for use with the various specialised utilities available for turning ASCII files into PostScript files of Cosmic powers and flares, then Marty and I lightly edited the power texts. I'm making available a PDF file of the powers we had available that night; you'll need Adobe Acrobat Reader or a workalike to read and print it. (Since these powers have been posted publicly, I assume no one will mind if I do this. If you recognise your material here and want to see it taken down, let me know.

Because of Seattle Cosmic's li'l mascot, I had been planning to make sure the Slug power came up somehow, but forgot in the excitement. As I mentioned above, it turns out I got it personally anyway. And a good thing too, because Marty and I insisted everyone illustrate the Bad Powers they drew in coloured pencil, and I had some definite ideas: 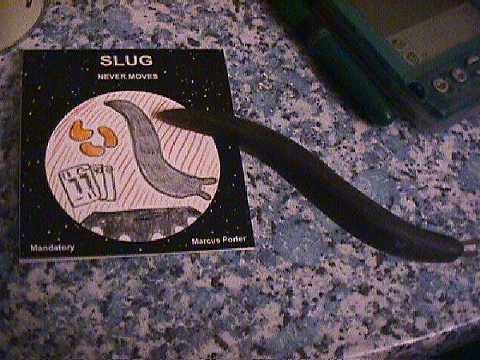 The Slug: A Bad Power, illustrated by Yours Truly (notice prominent cheese snacks in illo)

We played with a 50/50 mix of Full Moons and Cheese Moons again. It was a sad, sad game, made sadder by the fact that at one point we drew a moon that made us pass our powers to the right, and we drew another moon that made us draw another Bad Power for a turn (we illustrated those too), so that by the end of the game, the powers were as follows: 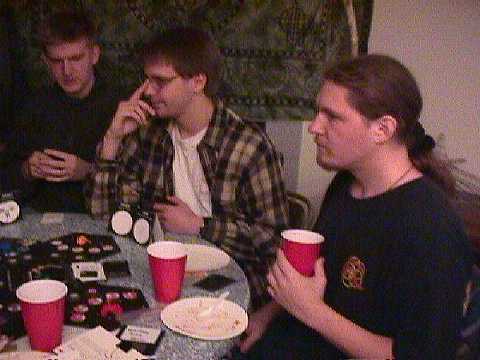 Want to see what New Guy Kisa looks like? That's him, above. It's the only photo we have of him for this week. We have more coming up, though. 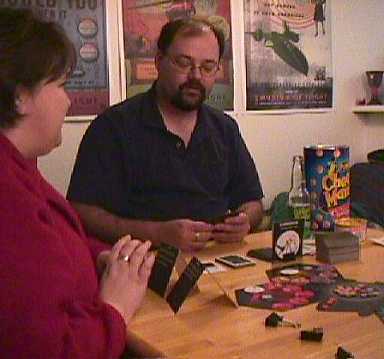 Meanwhile, during the Odd, Er, Impotent Game, things were going similar-like. They had to pass their powers around too (which John said was "more fun than winning"). As Mark recounts, 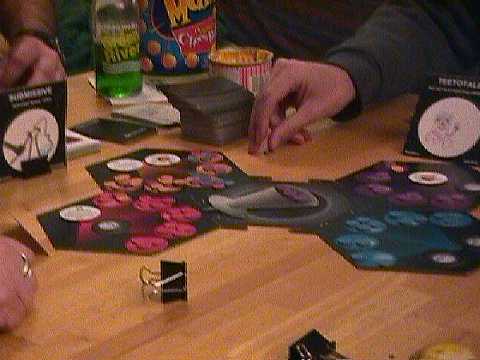 The Odd, Impotent Bored (er, Board)

Mark "won" again, hurray (see caveats for Even Impotent Game below). For this he was awarded a fishgun water pistol. Here Marty has painstakingly stitched together out of two separate shots (good job, Marty!) a nifty panoramic shot of the winner and one of his victims, using the GIMP. Incidentally, Ben Gertzfield, the Debian maintainer of the GIMP, the very version of the very software we used to prepare the photos on this and other pages on the site, is a devoted player of Cosmic Encounter, and I have seen him post frequently on rec.games.board.ce. You can play with us anytime, Ben! 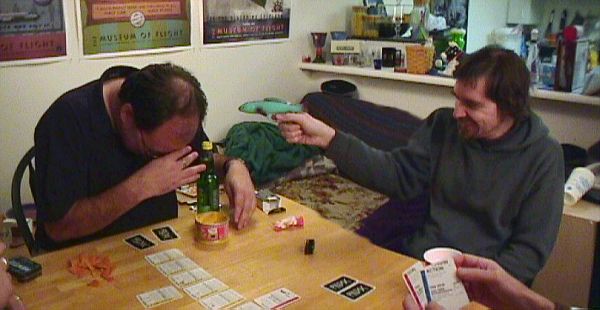 Somehow, I managed to win the Even Impotent Game, which was quite a feat since as Slug I wasn't even allowed to move (much). Say rather that everyone else lost. 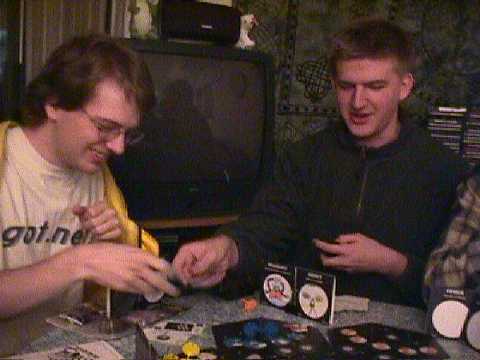 Having for some reason turned down my suggestion of an OmnImpotent Segment of the Evening (each player taking an Omnipotent pair and an Impotent pair of powers, to see if it would somehow (choke) "balance out"...), the Odd Team had broken out Fluxx, Seattle Cosmic's standard time-filling game, while we finished our Impotent Game. 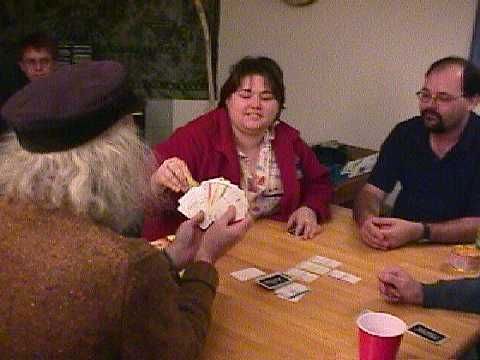 The Fluxx game seemed to go on forever, well after we finished our Cosmic game, so when Kathy won, a dinosaur that EXPAAANDS when you drop it into water seemed the obvious prize. 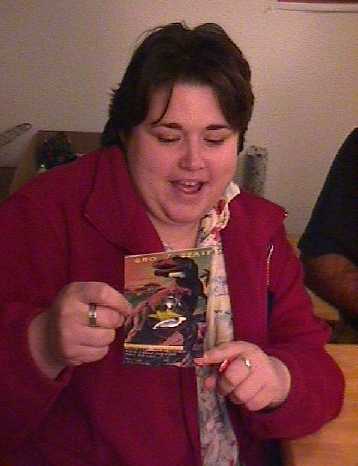 Now it was time to vote on the Grand Prize Winners. (Marty and I did not vote.)

Mark had won both Odd games, so he was unanimously voted the winner by his team. Lion had shown the most élan during the Even games, not only during his operatic rendition of his powers, but throughout the evening. He was voted winner almost unanimously -- one person tried to vote himself Grand Prize Winner instead (I'll give you a hint: he's addicted to bragging, and he's not chicken to, either).

Grand Prize was a fresh-cut, printed copy of the Bad Powers on cardstock, direct from Kinko's (if you knew how long we waited for them...) Do you think Lion and Mark like their prizes? 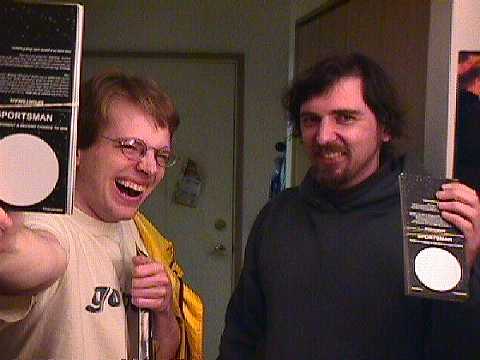 Grand Prize Winners Lion and Mark show off their booty

My only regret from this session is that we didn't take a photo of the vast snacky cheesehoard. Next year, perhaps?

P.S. I literally can't remember the last time we had a drive-by shooting at Game Night! Good going, guys!